Why settle in Uruguay and through which legal entities do business?

Since the appearance of COVID-19, Uruguay has aroused strong interest worldwide as one of the countries that has best managed the health crisis.

Through the following Newsletter we will announce some benefits of Uruguay from a tax point of view that allows it to be a jurisdiction to be considered by foreigners when looking for a country that offers tax advantages, legal and political stability to settle and develop business or make investments.

At the end of the document see the comparative of the most used legal regimes when carrying out a business or investment in Uruguay or from Uruguay abroad, and their main characteristics.

As one of the main fiscal aspects that we can mention, what differentiates Uruguay from most countries in the world, including the region, is its territorial tax system.

It has as a particularity, taxation at source as a general regime, which has been modified in recent years for individuals, adding certain exceptions.

In this sense, the criterion of the source implies that the income obtained by legal entities or individuals outside Uruguayan territory will not be taxed or subject to taxes in Uruguay.

In addition, legal entities that obtain income exempt from the obligation to pay income tax, will also be exempt from withholdings when distributing their earnings to shareholders or partners.

As mentioned above, there are some exceptions to said regime, such as the income obtained by resident natural persons through income from movable capital from abroad (understood, dividends or interests, among others) [2], exception included as of year 2011.

Regarding this last point, it is important to clarify that those individuals who are residents may use the taxes paid abroad, for the aforementioned movable capital income, as a tax credit in Uruguay, in the absence of a double taxation situation.

It is from the emergence of these exceptions to the source regime, that in order to attract foreigners to settle in the country, Uruguay promotes a “Tax Holiday” or “Tax Holiday” regime for those new tax residents.

These may choose once, to pay the Non-Resident Income Tax (IRNR), exempting them from paying taxes on movable capital income obtained abroad for the fiscal year in which they change residence, and during the following five fiscal years (six fiscal years in total). [3]

In this regard, and in order to further encourage the installation of foreigners in the country, it is that on June 15, 2020 a bill [4] has been sent to Parliament which aims to expand this tax benefit and even give a new option, establishing that those new tax residents may choose to:

Regarding this bill, it is important to clarify that it provides for those people who still maintain the IRNR option established in the previous regime, who can take advantage of this new regulation, by either of the two detailed options.

In the event that it is decided to continue with the IRNR regime, the period elapsed will be considered for the purposes of calculating the remaining years for which the benefit will be maintained.

LEGAL FORMS COMMONLY USED IN URUGAY TO DEVELOP AN ENTREPRENEURSHIP

When a non-resident or a new resident thinks about carrying out an enterprise, either nationally or internationally, we can say that there are three commonly used legal structures, the Sociedades Anónimas (SA), Sociedades de Responsabilidad Limitada ( SRL) and a recently incorporated legal figure in Uruguayan legislation called Simplified Stock Companies (SAS).

In this regard we will mention the main characteristics of these three legal figures and we will propose a comparative table for a better understanding of the similarities and differences of each:

SAs are legal entities regulated by the Companies Law (LSC) 16.060, made up of capital which is divided into shares, each share has the right to one vote, and they can have a term of more than 30 years, with a social object that contains the activities that you can specifically carry out.

It is important to mention with respect to this last point that many times this type of company is incorporated with a very broad object that allows it to carry out practically any type of licit activity.

It is a legal structure that allows the development of ventures that require accumulating large capital.

At the time of incorporation, it must have at least two shareholders, but later all of its share capital can be transferred to a single shareholder. As for the transfer of shares, we can say that the same by law is free, the social contract can only limit the transmission, but never prohibit it.

With regard to the constitution, these are usually slow, since they are subject to the control of the Internal Audit of the Nation (AIN), then they must be registered in the National Registry of Commerce (RNC) and subsequently make publications and register them in the RUT before the DGI, Uruguayan tax authority.

For greater efficiency in terms of incorporation deadlines, Insight offers pre-incorporated companies, which considerably reduces the times for the client to use it.

Regarding the privacy of the SA, we can say that although there is some privacy regarding the shareholders, since when registered shares are issued they are registered internally in the books of the company and when they are bearer they do not carry No internal registry, currently the law requires that both types of shares be reported to the Central Bank of Uruguay (BCU) as well as the final beneficiaries or people who exercise control over the company.

As for the liability of the shareholders, they do not respond with their personal assets against social debts, not being liable towards third parties, nor responding with their private assets against the social creditors, unless they show intent in their actions.

CHARACTERISTICS OF THE SRL

Like the SA, they are regulated by the LSC, but they are personal companies, the person prevailing and not the contributed capital, so it is not divided into shares but into social quotas and each member is called a partner, requiring for its constitution at least two and a maximum of fifty. This number of two or more partners must be maintained throughout the existence of the SRL. Its term of validity cannot exceed 30 years without prejudice to some admitted extensions and there are no minimum or maximum capital.

As for the constitution process, it is lightened, since it is not subject to the control of the AIN, and must be registered with the RNC and make publications.

As a limitation we can say that the social contract must specify the object of the SRL, limiting its activity to developing said object. In any case, a broad object can be envisaged that includes practically any licit activity.

At the time of the constitution, the partners are required to integrate at least 50% of their contribution in money, with a term of 2 years to contribute 100% of the remaining capital in money, while if the contribution is made in kind the same 100% must be contributed at the time of signing the social contract. Counting each quota with a right to vote.

Regarding the transfer of the social quotas, we can say that the procedure is somewhat more cumbersome than for the SA, being free when it is carried out between partners, unless the social contract contains some limitation or when the legal regime of majorities is altered.

When the transfer is made to third parties, the approval of 75% of the capital is required for companies with more than 5 partners, and if there is less to proceed, unanimity is required.

Regarding privacy, the partners of the SRL arise from the social contract, however, currently, the law requires that the partners communicate with the Central Bank of Uruguay (BCU) as long as they are not natural persons, as well as the final beneficiaries or people who exercise control over the company.

The SAS, unlike the two types of companies mentioned above, is not governed by the LSC (there are mandatory rules), but were recently incorporated by our regulations from Law 19,820 (Law for the Promotion of Entrepreneurship). We can say that they are capital companies, which are divided into shares, and that their main characteristic is the flexibility they possess.

Regarding the vote of each share, it is possible to attribute to each class of shares a single or multiple vote and its term of validity may be more than 30 years. On the other hand, these companies may define an undetermined object in their bylaws, as long as it is a lawful activity.

When it is established, the law allows a single shareholder to form the SAS, and may also remain the sole shareholder throughout the life of the company. Regarding the transfer of shares, we can say that it is free, however, the law establishes the possibility of statutory restrictions on the sale, prohibiting it for a maximum period of 10 years.

With regard to the constitution, it is foreseen that these will be very agile and digitized, it is expected that they will be ready in 48 hours, currently the digital system is not in operation, so the incorporation period may take somewhat more than the provided in the regulations. This abbreviated term is due to the fact that they do not require the control of the AIN as long as their annual income does not exceed 37,500,000 IU (approximately USD 4,000,000), nor do they require publication at the time of incorporation.

At the time of the constitution, it is required that the shareholder partners integrate at least 10% of their contribution in money with a term of 2 years to contribute 100% of the remaining capital in money, while if the contribution is made in kind on It must be contributed 100% at the time of signing the social contract. Counting each quota with a right to vote.

Regarding the privacy of the SA, we can say that, although there is some privacy regarding the shareholders, at present the law requires that the holders and final beneficiaries of the Central Bank of Uruguay (BCU) be notified. the shares.

The liability of the shareholders is limited to the contribution without exception, provided there is no fraud or abuse.

[4] The exact date of its approval is not known, but it is expected that it will take place in the coming months, due to its importance in promoting the arrival of new fiscal residents in the country. 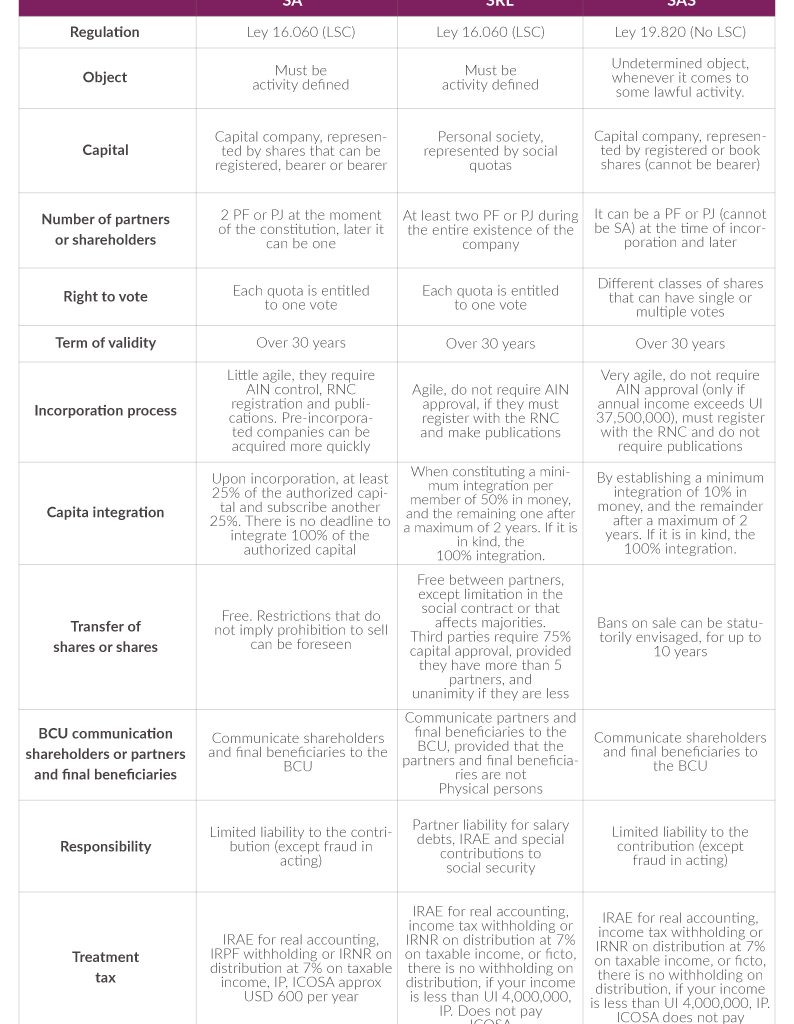